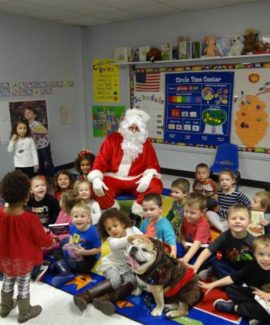 For fourteen years, Williams Construction Co. has been blessed to have the opportunity to help celebrate the Christmas season by handing out gifts at the Pryor C.A.R.D. Headstart locations.

Members of the Williams team, which included Santa (played by Jay Hogan), Santa’s Elf (played by Kathy Porterfield) and Rudolph (played by Winston the bulldog), enjoyed in the excitement of the kids as they visited with Santa and opened gifts. Every year the Williams team looks forward to seeing the smiles on the children’s faces and hearing about their excitement for the Christmas season.