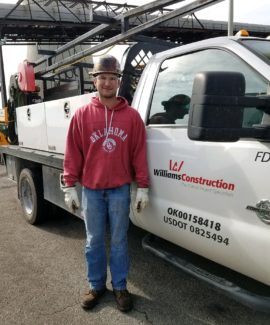 Williams Construction Co. would like to congratulate Cody Todd for his recent promotion to Ironworker Foreman. Cody started with Williams seven years ago as an Ironworker Apprentice. Before his promotion to Foreman, Cody worked on several critical projects such as two coal dumper replacements, roof restoration at GRDA and fire suppression system at Dupont as an Ironworker Lead Man.

Cody exhibits several qualities that made him a great fit for the promotion. On numerous projects, Cody has been a valuable asset with his ability to be very thorough and to make critical decisions on the challenging aspects of the job, while still being able to effectively communicate with other members of the workforce team. Also, as many know safety is the number one priority at Williams, Cody has been a steady example of carrying out our safety culture and expectations on project sites.

As Cody transitions into his new role as Foremen, he plans to continue to keep working just as hard to remain an example to his team and an asset to our clients. Again, congratulations Cody, we are proud to have you as a key member on the Williams team.