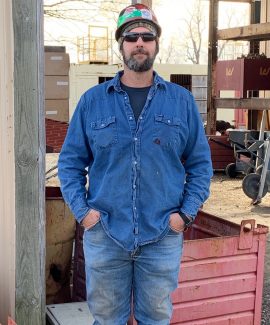 Josh has led crews on many critical projects for Williams over his 20 years at the company, but has really made a name for himself replacing rotary coal dumpers and associated material handling equipment over the past few years. His latest project was a Tandem Rotary Coal Dumper replacement in Baltimore, Maryland. Josh, along with approximately 20 of his Williams peers, successfully completed the replacement in 13 weeks with no recordable safety incidents. To date, Josh has completed five rotary coal dumper projects in his career and is ready to start his next one in early 2020.

Josh’s time at Williams has not only consisted of rotary coal dumper replacement jobs though. His passion and knowledge of the industry as a whole lends itself effectively even behind the scenes. Josh spends countless hours with our Project Management team planning and strategizing bid opportunities, project walks, and man-hour scheduling for bid proposals and upcoming projects.

When we asked Josh what his dream project would be just a few years ago, he stated “installing a rotary coal dumper in Colorado during the summer or in Florida close to the beach.” The Williams team hopes that we can make his dream come true. Thank you, Josh, for your dedication! We are excited to see what the next 20 years holds for you and our team.